A band from Prague which doesn’t recognize genre boundaries.

Wild sound and poetics of the dark side of everyday reality.

CD TA DĚFKA is available on e-mail: sfmagdalenka@gmail.com on phone number: +420 732 511 368on facebook: facebook.com/sfmagdalena
in better times on live concerts

We let you know 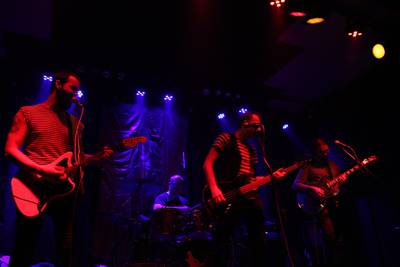 The band, founded in 2007, went first by the name ‘Ta Defka Si To Vymyslela’ (The Hooker's Invention). As ‘Ta Defka’ -The Hooker, it then played in various known and unknown clubs in Prague and elsewhere. In 2016 the band acquired a second guitar and – apart from the sound – the name has also changed to ‘sf. Magdalena’ – St. Magdalene (who after all wasn’t that saint either…). With this new name, the band self-published a CD in 2019, which was then named as an honour to its previous incarnation: Ta Defka.

Sf. Magdalena connects people with different musical approaches. Wild and aggressive sound is created by uncompromising drums, imaginative base, complementary guitars and at times almost frantic singing. Punk approach has been with the band since the beginning until today. However its production is influenced by many other styles – from blues to metal. Emphasis on original Czech texts created by fragments of impetuous thoughts and images of the world in and around us is very important for the band. That as well, as desire for beauty and love disfigured by the scars of illusions and sense of its unachievability.